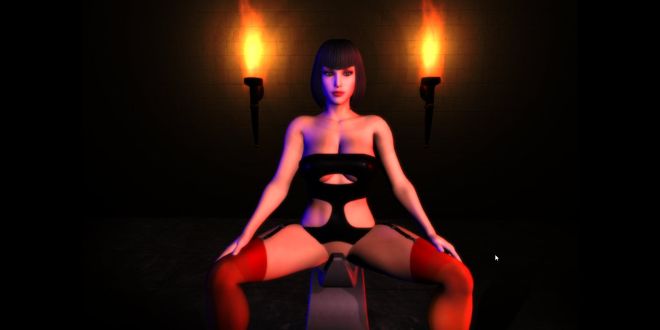 I played the FemDomination beta release and thought I would review it for you.  In the release version however, there will be additions or changes that I haven’t seen.

Let’s look at the full game, it has five sections, the temple, orientation, the chair, the slave and the dungeon.  The temple allows you to explore and gives the other sections somewhere to live.  The menus to access everything now are much better than in the demo of the game. FemDomination also works with Occulus Rift, HTC Vive as well as the PC; as I don’t have any VR headsets the review is based on the PC 2D version.

After selecting a section it took a while for the scene to load, this is because of the protection system; it is only a matter of seconds, but there’s no loading message to warn you, so be patient.

The Dungeon has two separate endings, but the beginnings were the same, which I thought was a shame. All in all FemDomination is a well written and well designed game, which will only get better.  The release price is due to be $39 for the full game which isn’t bad value for a downloadable game of this quality.

There are big plans for future products, including an expansion of the Domination range, so watch this space.  I look forward to reviewing up and coming versions at a later date.

For a different kind of Fetish take a look at our post about 3D Sex Villa; you can use all sorts of fetish gear on your virtual characters.

Visit FemDomination and find out more

The most original adult game around

iStripper cosplay is one of the favourite categories in this popular desktop strip game; what’s …